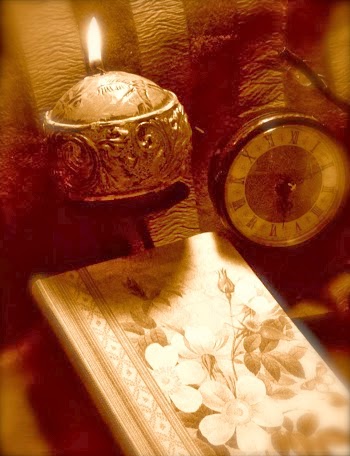 Georgie Witherspoon at four: a skinny little girl with skinned knees, a thick mass of untamed chocolate brown hair, wearing mixed matched socks and dragging an old leather briefcase across the backyard and towards a small plot of earth next to the playground.

When she reaches the plot--formally a small sandbox--she drops the briefcase and wipes a bit of sweat from her brow. She surveys her work from the day before with a grin on her peanut butter stained face. She practically inhaled her lunch so she could get out and work in her garden.

She opens the briefcase and smiles wider at the treasure she had found on her nature walk with Moira: a breathtakingly beautiful collection of rocks and stones. There was a variety of shapes and colors, and a few that shimmered. And the best one of all was a big grey and black one, the size and shape of a football. Georgie knew just where she wanted to put it too!

She took off her blue, then yellow sock, grabbed her little green shovel, and stepped inside giggling at the ticklish feeling of earth between her toes. She carefully steps around the blue egg-shaped stone she found in Gram Angie’s backyard. She put lots of red rocks around that one to keep it warm, just in case it hatched. She hopped over the pinkish, veiny one, which she surrounded with grey rocks to keep it cool. She found that one near Mother’s rose garden. She was pretty sure it was a brain. Maybe Isaiah’s; his nanny was always asking him where his brain was.

She tiptoed right by the big brown and speckled white one she found at the beach, along with six little ones that looked just like it. It was a sleeping Mother Owl and her babies. Georgie kept a small bowl near them and never forgot to fill it with bird seed every evening so they would have food when they woke up. The bowl was empty again, as it was every afternoon she came to work in her garden.

Right in the middle was where she would put her newest finds; a big piece of the moon and a few stars that must have fallen from the sky during last week’s rainstorm. They had been carefully scrubbed during her bath last night and were ready to be planted. She dug an ankle deep hole just for that stone and drew a circle in the earth around it for the others. Then she took the same path to retrieve her moonstone.

As though it were a precious crown, she carried it to its new spot, carefully set it inside the hole and filled the gaps with earth, cushioning it like pillows. Just as tenderly, she placed the three shimmering star rocks--blue, white, and tan--in a triangle around the moon. Then she placed the remaining seven rocks around them: A big peach one for Daddy, a medium sized dark brown one for Mother, a long light brown one for Elijah, a long light tan one for Isaiah, a creamy pinkish little one for Jennifer, a honey hued baby one for Georgie, and a medium sized reddish-brown one for Moira.

She stood back and admired her work, the sunshine making the star rocks shimmer, and her seven little family of rocks that looked almost like they were dancing. She filled the owl bowl with more bird seed from her briefcase, packed up her shovel and socks and dragged the case back inside.

Another wonderful afternoon in the garden.
Topics: Georgie Witherspoon
Email ThisBlogThis!Share to TwitterShare to FacebookShare to Pinterest

Gracious words are like a honeycomb, sweetness to the soul and health to the body. Proverbs 16:24